President Joko Widodo has urged the banking sector to assist downstream processing of raw materials, which would increase the value of exports while also fostering economic expansion.

As a result of Indonesia's ban on nickel exports in Jan 2020, miners were forced to process the metal domestically to create higher-value commodities for export. The export of bauxite will be prohibited starting in June, and other commodities such as tin and copper may follow. The development of downstream sectors is intended to accelerate Indonesia's economic expansion, enhance exports, and raise export competitiveness.

Coordinating Minister for Economic Affairs Airlangga Hartarto said the government will add more natural resources to the list and incentives will be offered by the government and Bank Indonesia. Chairman of the Financial Services Authority (OJK) Mahendra Siregar said financing will help mitigate the effects of global unpredictability and the impending recession in advanced economies.

Freeport Indonesia says its $3 billion copper smelter project in Gresik will be fully functioning in early 2024. Once in operation, the new smelter, which was started in 2021, will be able to convert 1.7 million tons of copper concentrate each year into 550,000 tons of copper cathode, which can then be used to make items like electrical cables, pipelines, and electric vehicle (EV) batteries. Construction of the $1.63 billion project, which employs 40,000 people, is now over halfway finished.

The Gresik Smelter Facility was created to meet President Joko Widodo's vision of more downstream processing of natural resources and to be a component of the EV manufacturing ecosystem in Indonesia. The ambition is to maximize the added value of Indonesian raw resources from mining, agriculture, and plantations, which the President expects to be processed locally. It will be the largest single-line design in the world as copper plays a significant role in the manufacturing of EVs, in addition to the metals used in battery production, such as cobalt, lithium, and nickel; particularly in the wiring needed for EVs.

The copper concentrate, which Freeport mines at the Grasberg mine in Timika, Papua, will be processed at Gresik. Freeport holds a 40 percent ownership of the business, with Mitsubishi holding the remainder. Following the divestment agreement between Freeport and the government, which resulted in the extension of its 20-year contract, Freeport intends to concentrate on creating an underground mine and smelter at Grasberg.

The International Day of Persons with Disabilities falls on Dec 3 each year, with the aim of promoting empowerment, and helping to create real opportunities for people with disabilities.

RCP has a community of members including parents who have ACP (Children's Cerebral Palsy), doctors, sympathizers and other community support systems.

Crown Records Management Indonesia sponsored this event by giving cash and goodies, educational activities, various games for CP children and their families. They had fun together and enjoyed the event.

The government’s recent incentive to accelerate the development of the coal industry is insufficient, according to Industry players engaged in coal gasification. Last year, President Joko Widodo signed a regulation granting companies with mining licenses (IUP) or special mining permits (IUPK) 0 percent coal royalties, which is insufficient for contract of work (PKP2B) holders.

The government has been seeking to accelerate downstream efforts and transform low-quality coal into value added-products, including coal-to-dimethyl ether (DME). Chairman of the Indonesian Mining and Energy Forum (IMEF) Singgih Widagdo said the economics of coal-to-DME processing facilities were complicated by numerous external factors and that the government will need to provide full support and consider granting market access, investment protection, and other measures instead of relying on the 0-percent coal royalties to support the industry.

The House of Representatives will include the omnibus Healthcare Bill in the 2023 National Legislation Program (Prolegnas). The decision was made after over 28 hearings with medical and healthcare associations, and their input mainly revolved around the centralization of powers in the executive branch, weakening of medical associations, and the standard of medical practice. For these reasons, the majority of local medical associations opposed the bill and staged demonstrations, in line with a history of opposing many healthcare reforms.

Healthcare associations such as hospital and pharmaceutical company associations responded more positively. But the Indonesian Hospital Association (PERSI) highlighted the unreadiness of the online single submissions (OSS) system to be used in Indonesia’s healthcare system and the importance of standardizing and improving healthcare quality here. AmCham believes that restrictions that bar foreign doctors from practicing in the country need to be lifted, and greater access to innovation and advanced medical treatments is also an urgent priority.

President Joko Widodo urged regional governments to combat extreme poverty and stunting during the National Coordination Meeting of Regional Leaders on Jan 17. President Widodo said economic growth was projected to be between 5.2 and 5.3 percent in 2022, but despite this the national extreme poverty rate is still high and needs to be eradicated by 2024. The National Team for the Acceleration of Poverty Reduction said there were 10.86 million people living in extreme poverty nationwide in 2021.

Widodo also told regional leaders to decrease the stunting rate from 21 percent in 2022 to 14 percent in 2024. He said a high rate of stunting could impact the national demographic bonus, expected to peak between 2030 and 2035, by lowering intellectual and physical performance in the workforce. There are two critical times to lower the rate of stunting: during pregnancy and when the child is under 24 months old. He said government oversight of expectant mothers and toddlers is crucial in carrying out this intervention.

The US was the biggest contributor to Indonesia's largest ever trade surplus in 2022, as it imported $16.59 billion more than it exported to Indonesia. The $54.46 billion surplus was a year-on-year increase of 53.75 percent, with December marking a continuous 32 months of surplus.

Knitted clothes, machinery and electronics made up the largest commodity exports to the US with $2.86 and $2.83 billion, respectively. However, taking into account uncertainties in the US and other major trade partners, economists have warned Indonesia will have a smaller trade surplus, or even a deficit, in 2023. Not only will foreign demand sour, but domestic consumption is projected to increase this year, thereby increasing imports. 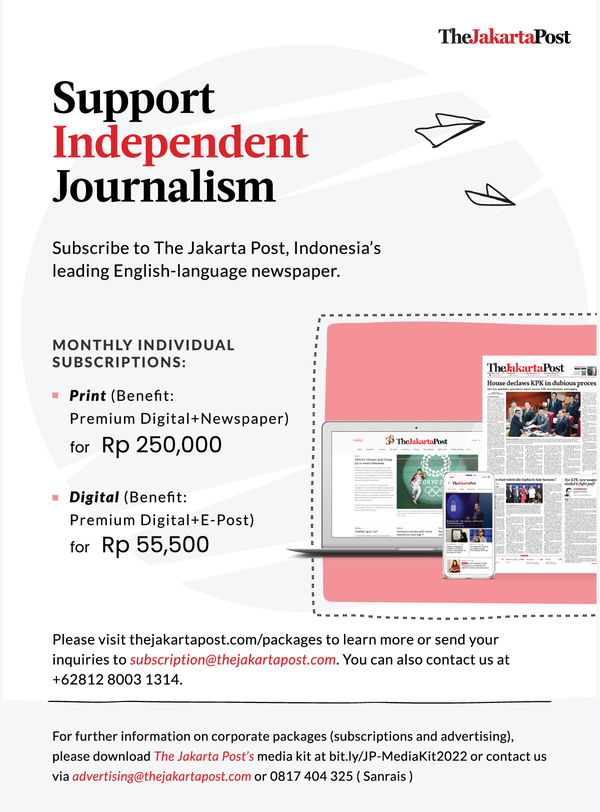